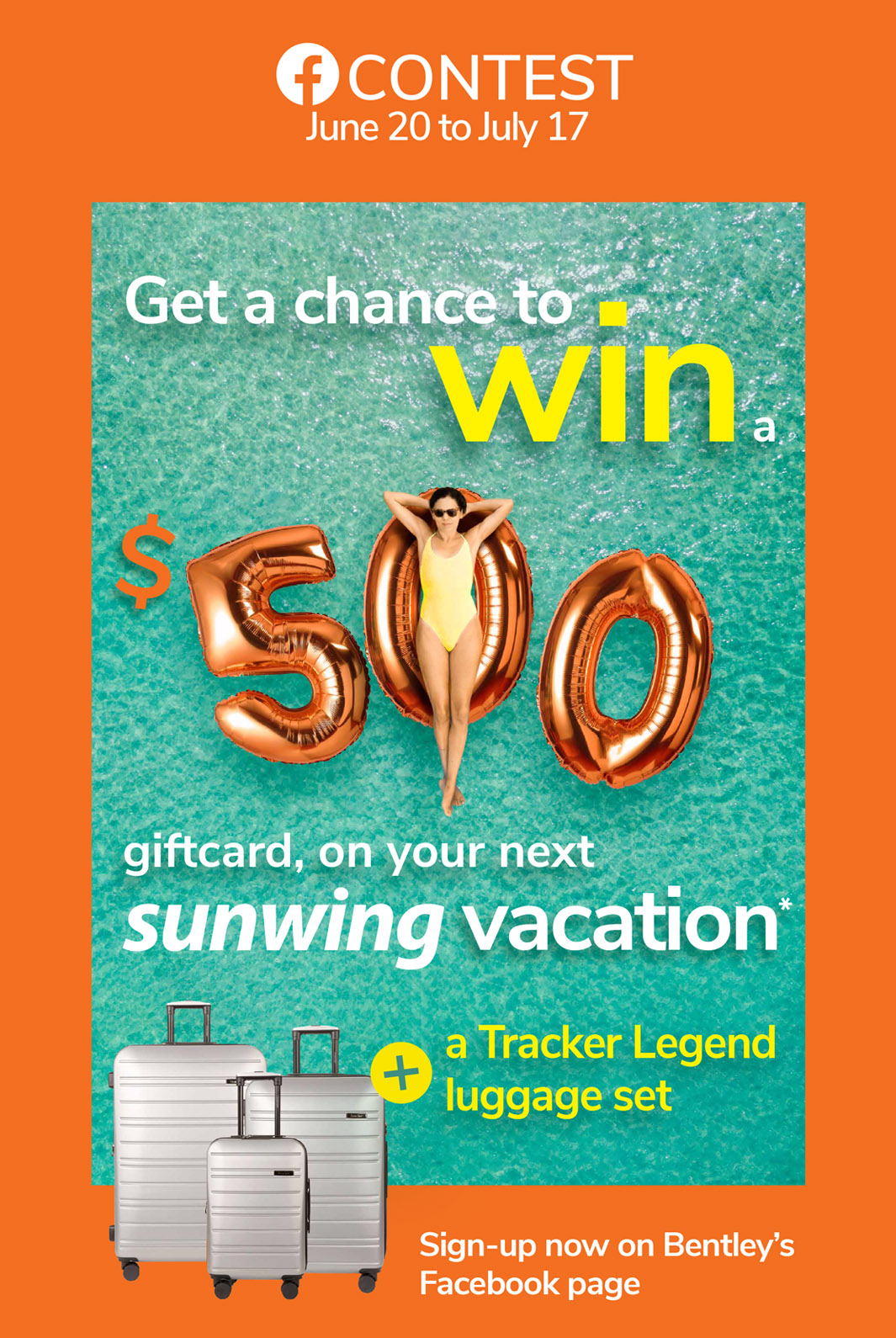 NO PURCHASE NECESSARY TO ENTER THE CONTEST OR WIN THE PRIZE. ONLY ONE ENTRY PER PERSON WILL BE ACCEPTED.

The Contest is organized by BENTLEY & Co. Ltd. (the “Contest Organizer”) with the collaboration of its partner Sunwing.

Duration of the competition:

The Contest begins at 8:00 a.m. Eastern Time (“ET”) on June 20, 2022 and ends at 11:59 p.m. ET on July 17, 2022 (the “Contest Period”). All entries received after the expiration of the Contest Period will not be eligible for the purposes of the Contest. The sole determinant of the validity of an entry will be the date and time of submission to the server(s) used by the Contest Sponsor in connection with the Contest.

Eligibility for the competition:

The Contest is open only to legal residents of Canada who are eighteen (18) years of age or older at the time of entry into the Contest. You are not eligible to enter the Contest if you are (or are living with) an employee, officer, director, representative, agent, consultant or prize supplier of the Contest Sponsor or any of its affiliates, licensees, franchisees or subsidiaries (collectively the “Contest Entities”). The Contest Sponsor reserves the right to verify the eligibility of potential winners.

Each entrant certifies and represents that any comment (the “Comment”) he or she may submit in connection with the Contest will comply with the following submission criteria:

In addition, by entering the Contest, each entrant, whether or not selected as a winner: (i) grants to Contest Sponsor, in perpetuity, the non-exclusive right to publish, display, reproduce, modify, edit, translate or otherwise use the Commentary, in whole or in part, for any purpose; (ii) waives all moral rights in the Commentary in favor of Contest Sponsor; and (iii) agrees to release and hold harmless the Released Parties (as defined below) from any and all claims based on image rights, defamation, invasion of privacy, copyright infringement, trademark infringement or any other intellectual property cause of action. In addition, by submitting the Comment, each entrant agrees that Contest Sponsor shall have the right, but not the obligation, to post, without compensation or notice, the Comment, in whole or in part, as is or as may be edited, along with the entrant’s name and city of residence on the BENTLEY website (the “Site”) on BENTLEY’s Facebook, in promotional booklets or documents, point of sale materials, promotional emails, or other promotional materials distributed in BENTLEY Sports stores and in any other online, broadcast or print media, as chosen by the Contest Organizer in its sole discretion.

By submitting an entry in the Contest, each entrant agrees to be bound by these Official Contest Rules which are available on the BENTLEY website (https://www.shopbentley.com).

Odds of winning a Prize (defined below) depend on the number of eligible entries received during the Contest Period.

Prize:
There is one (1) prize (the “Prize”) available to be won in the Contest, consisting of one (1) TRACKER LEGEND luggage set valued at five hundred and sixty-nine dollars and ninety-seven cents ($569.97) redeemable at any BENTLEY store (located in Canada), (2) a five hundred dollar gift card applicable to your next Sunwing vacation (see Sunwing Prize Terms and Conditions below).

The total value of the Prizes offered in the Contest is one thousand and seventy-nine cents ($1,069.97). Prizes are non-transferable except by the Contest Organizer. Prizes may not be used in conjunction with any other promotion or offer. Prizes cannot be substituted or redeemed for cash; however, the Contest Sponsor reserves the right, in its sole discretion, to substitute any Prize or any component thereof with another prize/component of equal or greater value.

The Prize is subject to the terms and conditions of Sunwing.

The Prize, and any portion thereof, is non-exchangeable, non-transferable, non-refundable, has no cash value and must be accepted as awarded, without substitution, unless Sunwing, in its sole discretion, determines otherwise. Sunwing reserves the right, in its sole discretion, to substitute or change the Prize, or any portion thereof, for another Prize of equal or greater value for any reason.

The $500 Sunwing gift card will be emailed to the selected entrant at the email address provided in the Contest entry form or as otherwise arranged.

Disclaimer and exclusion of liability:

The Contest Entities are not responsible for any typographical or other error in the offer or administration of the Contest, including, without limitation, any error in the printing or posting of the offer or the official rules, the drawings and announcement of any winner, or the distribution of any prize.

The Contest Organizer reserves the right, subject only to the approval of the Régie des alcools, des courses et des jeux du Québec (the “Régie”), to cancel, modify or suspend the Contest (or to amend these Official Rules) in any way due to any error, technical problems, computer viruses, bugs, tampering, unauthorized intervention, fraud, technical failures or any other causes beyond the reasonable control of the Contest Sponsor that corrupt or affect the security or proper conduct of the Contest in accordance with these Official Rules. The Contest Organizer, with the consent of the Régie (if applicable), also reserves the right to cancel, modify or suspend the Contest (or amend these Official Rules), without prior notice or obligation, in the event of an accident, printing, administrative or other error of any kind, or for any other reason, without liability to any person, including Contest entrants.

By entering the Contest, each entrant acknowledges that the Contest Entities will not be liable for any loss or injury of any kind incurred as a result of acceptance, possession and use or misuse of any of the awarded Prizes and each entrant hereby agrees to indemnify and hold harmless the Contest Entities and their respective successors, assigns, agents, employees, representatives, officers, directors and shareholders (collectively the “Released Parties”) from and against any and all such claims and agrees that he/she shall have no claim against the Released Parties or any other entity that may seek compensation or indemnification from the Contest Entities as a result of his/her participation in the Contest, and in the event that he/she is declared a winner of the Contest, for his/her acceptance, possession and use or misuse of any of the Prizes.

The Released Parties also disclaim any and all liability for any failure of the BENTLEY Facebook to operate properly due to any problems or technical malfunction of any telephone network or lines, computer online systems, servers, access providers, computer equipment, software, failure of any entry to be received by the Contest Sponsor on account of technical problems or traffic congestion on the Internet, any website including the Site and the BENTLEY Facebook, or any combination of the foregoing.

By entering the Contest, the potential winner authorizes the Contest Sponsor to use his/her name, city of residence, photograph, likeness, nickname and/or voice in any publicity related to the Contest including, without limitation, on the BENTLEY Website and Facebook, without additional compensation or notice.

Personal information provided by Contest entrants will be (i) collected by the Contest Sponsor; (ii) used solely for the purpose of administering the Contest, to contact the potential winner to notify him/her of his/her eligibility to win the Prize and to verify eligibility for the Contest; and (iii) accessible only by employees, agents or representatives of the Contest Sponsor directly involved in the Contest and will not be disclosed to others.

By entering the Contest, each entrant consents to the collection, use, and disclosure of his or her personal information for the purposes and in the manner described above. You may also contact us with any questions about privacy by email at serviceenligne@shopbentley.com.

The Contest is administered by the Contest Organizer. All decisions of the Contest Organizer with respect to the Contest are final and binding on all entrants. The Contest is subject to the laws and regulations of the Province of Quebec and the federal and municipal laws and regulations applicable therein. As a condition of participation in the Contest, to the extent permitted by law, each entrant acknowledges and agrees that any litigation or claim arising out of or relating to the Contest shall be resolved individually, without resort to any form of class action, and exclusively by the competent court in the judicial district of Montreal, Province of Quebec to the exclusion of all other jurisdictions and that such court shall apply the laws in force in the Province of Quebec without regard to its conflict of law rules or provisions. In addition, with the exception of expenses incurred by the entrant to enter the Contest, each entrant waives all rights to claim punitive, incidental or consequential damages or any other damages, including attorneys’ fees and disbursements.

Note that in these Official Rules, the masculine gender is used without discrimination and solely for the purpose of lightening the text. 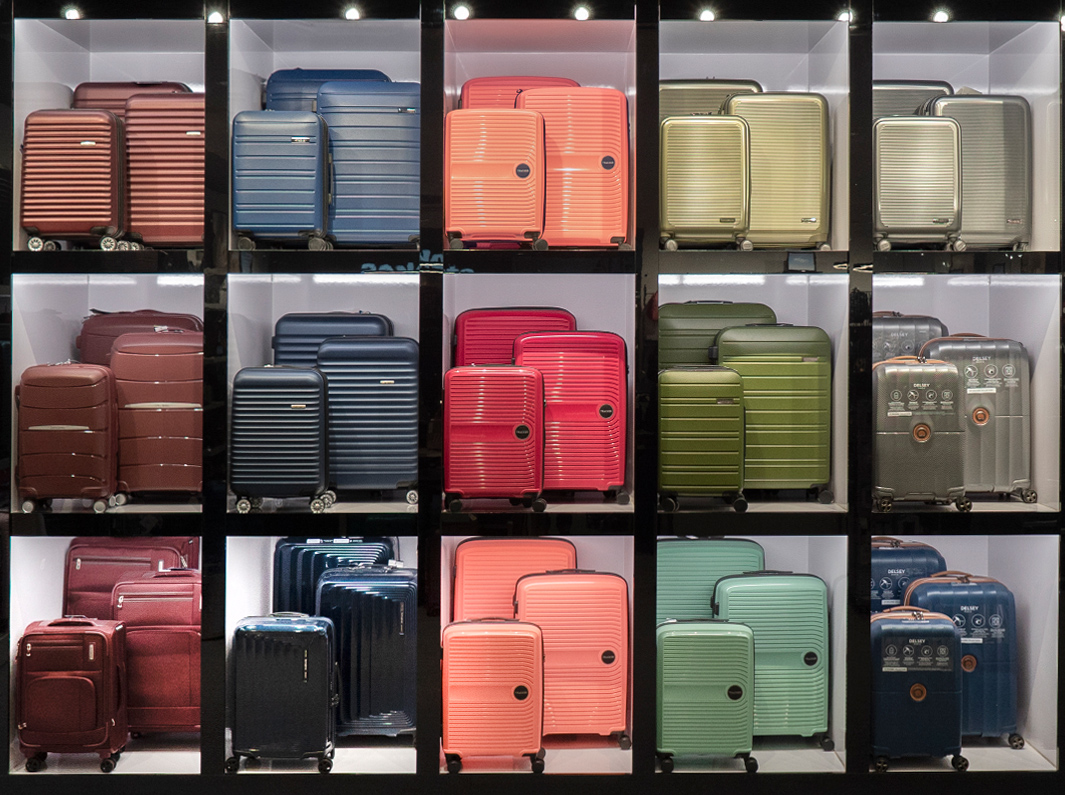 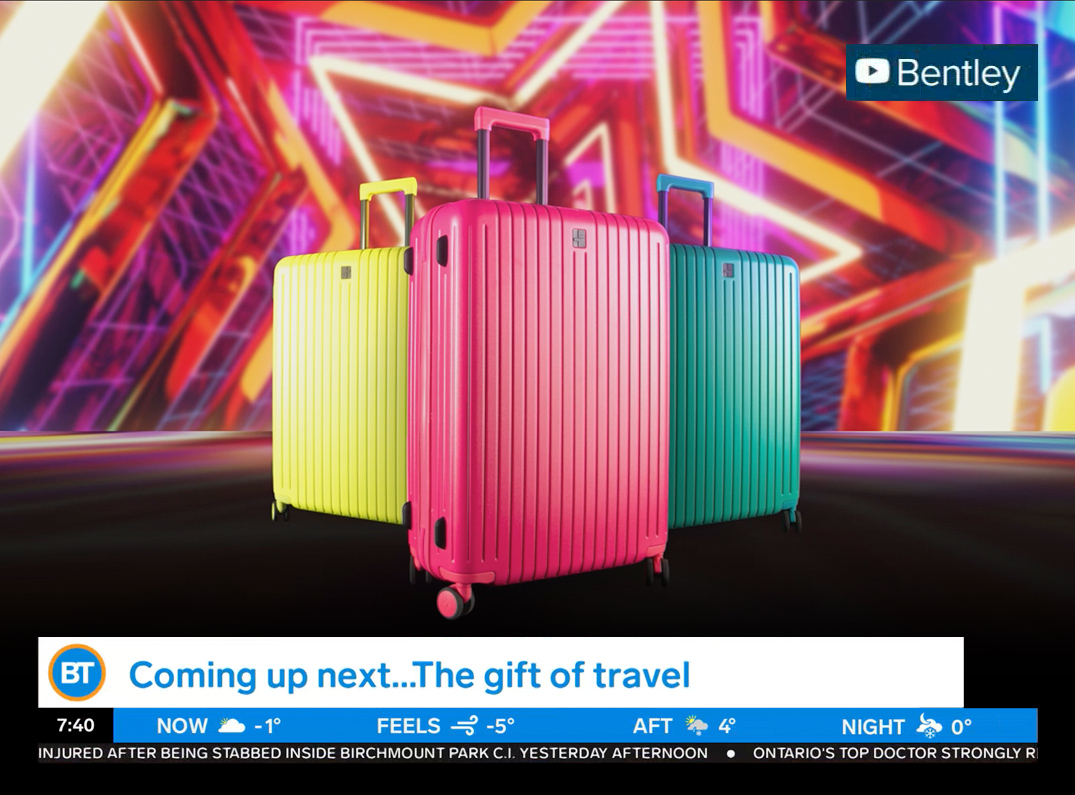 Breakfast Television hosted Bentley's very own Sandrine Giry, Vice President of Buying and Marketing, yesterday to showcase some of our amazing products just in time for the holiday season. 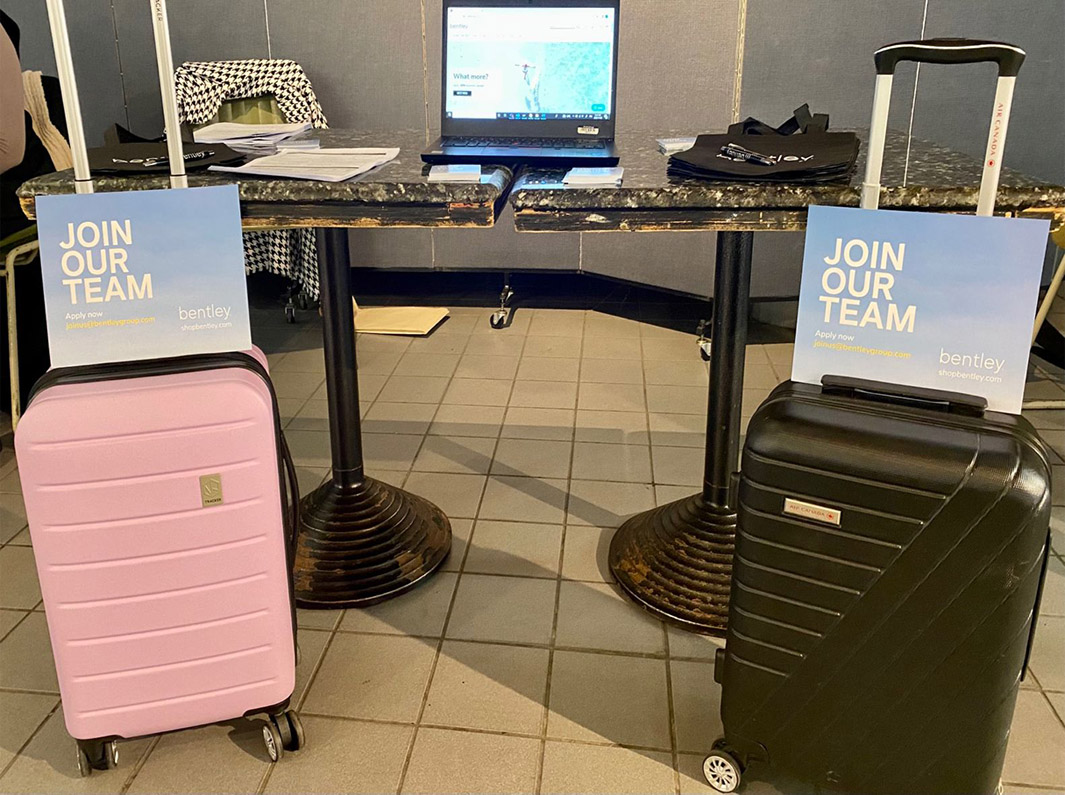 Come find us today at the Dawson College Job Fair. We are excited to meet you and discuss the many opportunities we have! Get ready to embark on a journey with us ! ✈️